People mostly write about customer support when it’s crappy. This is an exception.

I was getting tired of having smartcard reader that connects to USB, the wire is absolutely annoying and it’s so easy to forget it at home when leaving. So I bought an Omnikey 4040 that connects to PCMCIA. First try was fail, Flex computer shop sold me wrong reader and I didn’t notice until I got home. They were totally fine to replace it though :).

Next I tried setting it up. Another fail. There seems to be a kernel driver which didn’t work. I then filed a support request with HID Global Corporation. Two weeks later they sent me driver code that compiles for my kernel (2.6.32) and works too.

I then put it to another test. Tried to sign a document with new still in development phase id-card software from Smartlink. Signing hanged application. Oh, well, it’s not announced stable anyway. However web-based signing actually worked with a website that is known to be tricky. 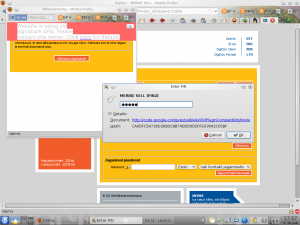 When you look at the picture you’ll notice that id-card software warns that the site isn’t using up-to-date API when accessing card and you’ll also see that the document signed is wrong, I only signed a local txt file. But, it actually works on linux and quite well, which is awesome!